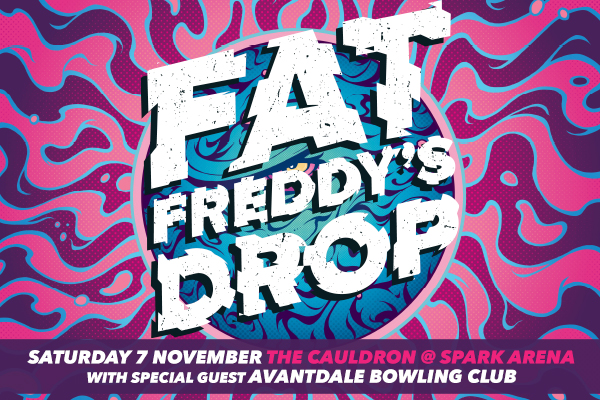 How lucky are we Aotearoa!

One show here in Auckland at Spark Arena in "The Cauldron"* format and the other in Wellington at the Michael Fowler Centre.

A multi-track music recording by Western Audio enables Freddy’s to stay true to their ethos of delivering the highest quality sound experience that fans have come to expect. Freddy's beat-maker and producer, MU aka DJ Fitchie, mixed live on-stage and then took the recording back to BAYS for a final heavyweight mix. The visual capture on camera from Transmit offers a relaxed window on Freddy's creative jam process.

When the band and their New Zealand crew that usually tour Europe with them gathered in June at the MFC, it was the first time they had been together since saying goodbye to each other in a carpark in Hamburg. They had played one show in Frankfurt when the Covid-19 reality forced the cancellation of their two month ‘Special Edition’ album release tour.  As Fitchie said, it was time to ‘pin your ears back & head for the corner’. Everyone went into self-isolation on their return and then New Zealand went into Level 1 lockdown. The rest is history.

*The Cauldron at Spark Arena is a two-for-one / double the fun, unique concert going  experience offering the option of a Fat Freddy's Drop dance floor and an intimate seated experience. The GA standing floor gives access to three sides of the stage and direct access to bars located inside the arena. For those who wish to sit, all seats have a perfect vantage point of the stage. There's something for everyone in The Cauldron.

Come and ease your minds and move your feet and let's start to dance again.

Read More
Back to Event Search

Please check back the week of the event for full details.

SHARE THIS
Tickets for all our events are exclusively through

Tickets bought from other sites may not be valid